Ivy Guild works on relocating one of the succulent plants from the UCI Arboretum.

Guild, who completes her M.F.A. in June 2021, envisions her thesis show in the Contemporary Art Center as a large organism, with both living and dead plants and fungi seeming to grow out of the walls, visibly supported by metal, in a post-apocalyptic vibe. Some of the dead materials will find new life and new shape over time, because Guild will inoculate them with a broth rich in mycelium spores, prompting fungi to create new life while simultaneously consuming their host.

“I like to work with biological material, both living and dead, as a way to reanimate and repurpose natural found materials while also using them as vignettes for speculation on the future of human-environmental interaction,” Guild says. “I’m looking at the future that may come to pass should we not pivot in the present.”

Guild herself is no stranger to pivots. Growing up in Phoenix, she loved both art and science. As a kid, she spent time in her jungle of a backyard looking at organisms under a microscope. In high school, she taught art to younger children and also spent a summer working at the Dolphin Research Center in the Florida Keys.

But when she started studying marine biology at the University of San Diego, she found herself obsessed with art in all of her spare time. When her mother was diagnosed with cancer that winter, it jolted Guild. In her second semester at college, with great trepidation, she dropped her biology classes to pursue art.

I’m looking at the future that may come to pass should we not pivot in the present.

Guild’s mother made a full recovery and was there to celebrate her daughter’s graduation with majors in visual arts and art history, and a minor in communications. Guild moved on to roles as a teaching artist at the New Children’s Museum in San Diego, curatorial assistant at the Lux Art Institute in San Diego, and a special projects coordinator at USD.

When she decided to pursue her M.F.A, she entertained multiple offers before choosing UCI.

“I knew I wanted to join a new conversation at this higher critical theory level that UCI offers,” says Guild. “And UCI provided a more expansive opportunity as a research institution, so I’d have the option to take classes in other departments.”

Her first year at UCI, Guild won a Medici Circle Scholarship from the Claire Trevor School of the Arts to support her research on weaving and natural dyes in the Driftless Region of Wisconsin, an unusually rugged geographical area in the Midwest. Guild turned the visit into a summerlong, 15,000-mile road trip across Canada, the Northern U.S., the Eastern Seaboard, and back along the Southern border. Along the way, she acquired a small, portable loom, collected plant material to work with, and took nature photos with her Mamiya C22 film camera. It all fed a transition she was preparing to make with her art.

“I had gotten almost guilty about the toxic materials I had been using in my artwork, and I wanted to pivot back to a more environmentally friendly practice,” she says.

Back at UCI with this renewed focus, associate professor of art Jesse Colin Jackson introduced Guild to Peter Bowler of the Department of Ecology and Evolutionary Biology, who was actively relocating plants from the 50-year-old UCI Arboretum as it was being cleared to make way for the new hospital on campus. Throughout the COVID-19 pandemic, Guild volunteered to help re-house plants with community members, while also collecting specimens for her art.

“I’m a hyper-empathetic person, and that extends to the environment, so I saw this as a way for me to alleviate some of my own existential dread about environmental crises around the world, and to get the community involved,” Guild says. “Every trunkful of plants that was adopted, I felt relief watching them leave the space.”

Guild wears permanent scars from scratches by some of the more poisonous plants at the arboretum, but she also acquired some beautiful living and deceased specimens for her thesis exhibition. The physical strain of working with giant plants at the arboretum served as a catharsis for Guild, as she draws from her lifelong love for biology, and comes to terms with her own experiences in a fragile human body. She calls herself a 27-year-old with the body of an octogenarian — with one foot and ankle held together by lots of metal and even, amazingly, grafted tissue of a horse heart.

“I’m working with these plants as a metaphor for my body as a biological material that needs updating to keep going,” she says. “But also as a sign of environmental catastrophes we see coming.” 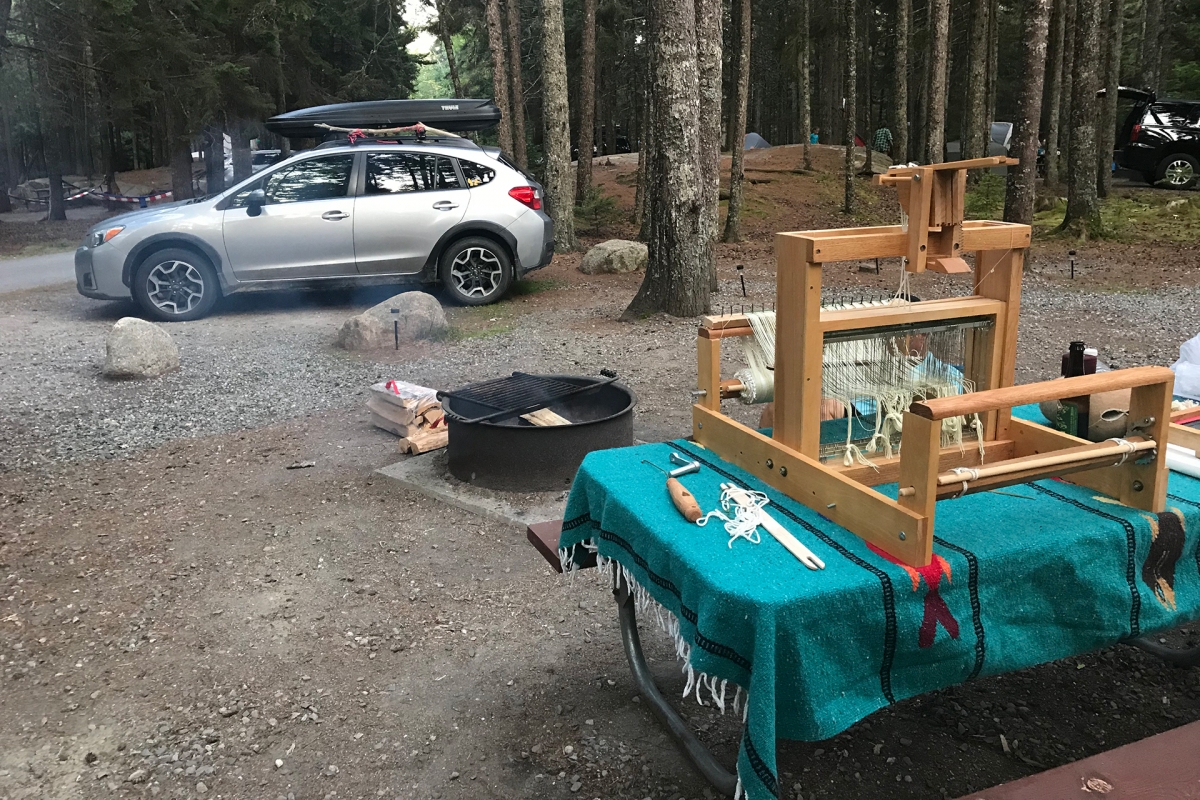 A view of a campsite during Ivy’s summerlong, 15,000-mile road trip. She acquired a small, portable loom to make some of her art. (Photo: Courtesy of Ivy Guild)

Since high school, Guild has enjoyed teaching art classes to children. As a UCI student, she’s continued working with children and teens as a teaching artist for the Laguna Art Museum and the Ocean Institute of Dana Point. But she was particularly interested in the opportunity to teach undergraduates at UCI.

“I’ve seen Ivy in action as a TA in one of my classes, and I was very impressed by her  situational responsiveness — she would often offer reading or viewing suggestions to individual students, or mention special events related to the topic of a class discussion,” says art professor Antoinette LaFarge, who is Guild’s thesis advisor. “That responsiveness is a hallmark of good teachers. And her enthusiasm in those moments is really contagious.”

Guild was accepted to the highly competitive Pedagogical Fellows program in UCI’s Division of Teaching Excellence and Innovation, which focuses on preparing future faculty from across all disciplines to excel as teachers. Admission into the two-year Pedagogical

Fellows program is especially rare for an M.F.A. candidate, simply because masters programs are so much shorter than doctoral programs, so there’s less time for the additional coursework required by the program.

Unexpectedly, Guild was part of the first cohort of Pedagogical Fellows forced to put their enhanced teaching skills to use through remote instruction during the pandemic. She was slated to teach an undergraduate course on speculative design — a hard to define field that uses design to help imagine what the future might be like, sometimes with the goal of forcing more critical thinking about how we are living in the present. Seizing on the opportunity to use technology in remote teaching, Guild recorded Zoom interviews with eight guest artists in speculative design, and then edited the videos to intersperse movie clips, music, and other elements to illustrate the conversation. A cross between a Zoom and a podcast, she called it a ZoomPod, and won funding for the series from UCI Illuminations, the chancellor’s arts and culture initiative.

Guild made a point to ask each guest artist to share their nonlinear career path, to help the graduating seniors in her class who were grappling with the uncertainty of graduating in the pandemic. Looking toward her own graduation, Guild admits to being transformed by the experiences of the past year.

“Prior to the pandemic, I would not have called myself someone in speculative design,” she says. “Having been through such a traumatic year, the idea of looking forward to see if we can fix the future before it happens has become something really essential to my practice. Speculative design is offering a new lens to think about my work as an artist.”

It’s unlikely this is the last pivot we’ll see in Guild’s artistic work.

“Ivy is truly one of the most idiosyncratic artists I’ve mentored. She is something of an idea generator, and the results tend to be unexpected because she brings together fields and methods that don’t often overlap — natural materials and high technology, for example,” says LaFarge. “Most of all, she works from an ethos that is strongly communitarian and biophilic — that is, appreciative of the importance of our cohabitation with nonhuman life forms — and this more than anything else makes her a true 21st century artist.” 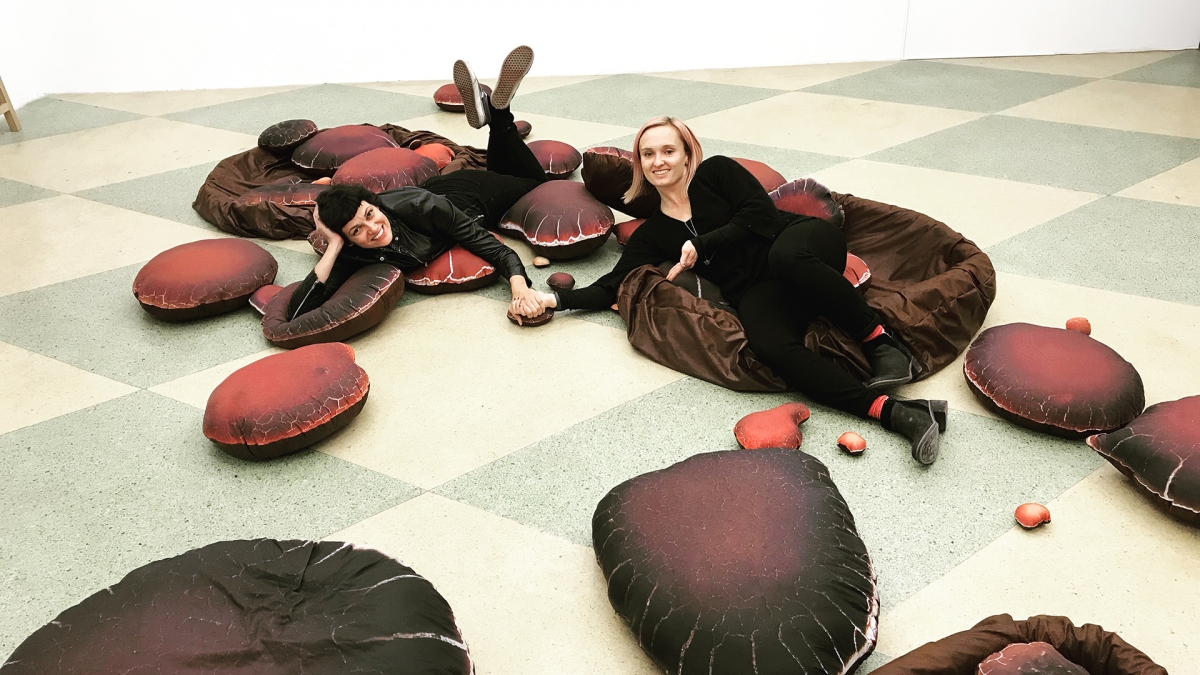 Ivy sits with fellow artist and former collaborator Zehra Khan in the middle of her exhibition Permeations of Percolation (2019) as part of the ACRE Projects in Chicago. (Photo: Courtesy of Ivy Guild)

To learn more about students and projects in the Department of Art, visit art.arts.uci.edu.

Learn more about Ivy Guild and her art at www.ivyguildart.com.