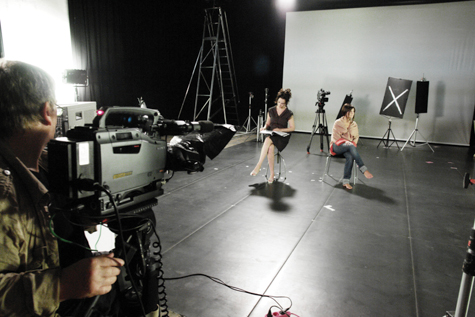 What would it mean to stage a love scene in film that would extend to a love scene in life?  It’s a question of image before experience or, more precisely, a question of experience inextricably bound up with image.  This is what X Love Scenes, a multi-channel video installation, explores.  Edison's famous May Irwin Kiss from 1896, a quintessential trope of cinema narrative, is restaged in X Love Scenes as an unresolved, traumatic, repetitive cycle.  What we are given to see is an actress, a director and a script girl on a film set.  The male lead is absent, replaced by a mark - a white chalk X on a black flag - that becomes the actor's stand-in.  While the script girl reads the actor’s lines, the actress performs her part vis-à-vis the flag - an empty sign.  As in Ruhm’s other films from her X Characters series (initiated in 2001), the lead actress is based on a character culled from a modernist film; here it is Michelangelo Antonioni's Il deserto rosso (1964).  Taken together - the actress who refers to an actress from another film and an actor who is represented by an empty sign - X Love Scenes reveals that the counter shot of the "Other," a convention required to maintain cinema’s reality effect, is in fact a visible absence.  We, in turn, are invited to explore the boundaries of our reality - in film as in life - and the role that desire plays in constructing it. | Related Links