"Who Gets To Look," Erik Benjamins and Sable Elyse Smith 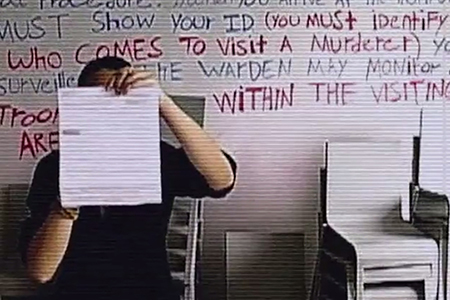 The University Art Gallery is pleased to present Who Gets To Look, an exhibition featuring audio recordings and text by Erik Benjamins and video and sculpture by Sable Elyse Smith. Working within different geographic settings and social environments, each artist’s work actively disrupts forms of spectatorship associated with tourism and violence. Coalescing in the space of the gallery, these works call into question the conditions that make it possible for viewers to temporarily occupy a space in the field of the other.

Gathered across various public sites in Chengdu, China, Erik Benjamins’Chengdu Field Recordings undercuts conventional models of sightseeing abroad, prompting viewers to reconsider the nature of tourism and what defines a tourist. Presented alongside texts generated by the artist during his stay in the city, the recordings echo throughout the walls of the gallery both defying a conventional sequence of time and inverting the dynamics of spectatorship and control.

A similar disruption echoes within Sable Elyse Smith’s video works, which pivot off intimate documents produced between the artist and her incarcerated father. As documentation of a deeply personal relationship mediated by the profoundly depersonalizing apparatus of the industrial prison system, Smith’s videos, How We Tell Stories To Children and untitled: Portrait, explore the far reaching trauma wrought by mass incarceration calling into question the social narratives that uphold it.

Through their respective conceptual and aesthetic strategies, the works in Who Gets To Look point to the troubling disjuncture between diverse individual experiences and totalizing social narratives, thus prompting viewers to contemplate the complicity of spectatorship while suggesting new and potentially fruitful modes of engagement. In the space of the gallery, the cadence and opacity of these works refuse the limits of concise narratives and instead continue to resonate beyond the exhibition.

Who Gets To Look_Virginia Arce 2017.pdf