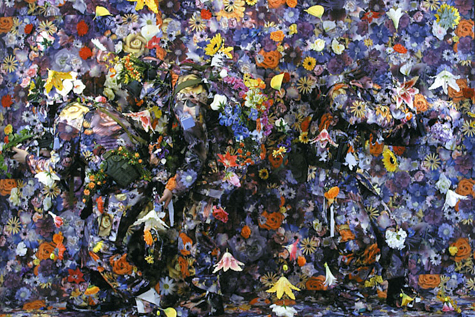 transPOP: Korea Vietnam Remix introduces a dynamic mix of sixteen critically acclaimed artists from Korea, Vietnam, and the United States, signaling an unprecedented engagement with the rich historic and contemporary linkages between Korea and Vietnam.  The featured artworks variously engage interconnections between the two countries, including the intersections of history, trauma, and contemporary popular culture.  The interactions between Vietnam and Korea span centuries but the exhibition focus lies in their shared history of a highly accelerated modernization process with militarized roots and the Cold War.

transPOP: Korea Vietnam Remix introduces a dynamic mix of sixteen critically acclaimed artists from Korea, Vietnam, and the United States, signaling an unprecedented engagement with the rich historic and contemporary linkages between Korea and Vietnam. The featured artworks explore interconnections between the two countries, including the intersections of history, trauma, and contemporary popular culture. The interactions between Vietnam and Korea span centuries but the exhibition focus lies in their shared history of highly accelerated modernization process with militarized roots and the Cold War. During the American War in Vietnam, the Republic of Korea was the second largest foreign military and economic presence in Vietnam behind the United States, with over 300,000 combat forces and approximately 24,000 skilled workers in exchange for substantial U.S. aid. The financial boon from the involvement in the war played a catalytic role in the development of Korea, laying the foundation for what is now the world’s 12th largest economy. The legacy of the Cold Wars is evident in the large Korean and Vietnamese diasporic communities in the U.S. In Vietnam, this accelerated modernity is evident in the breakneck speed of current economic development, as well as its entry into the World Trade Organization.

Since the late nineties, Vietnam and Korea has witnessed a significant development of popular culture, fostering greater cultural proximity locally and abroad. A global phenomenon known as the “Korean Wave,” has popularized Korean television dramas, pop stars, music, films, and fashion through East, Southeast Asia and beyond since the new millennium. As part of a growing inter-Asian flow of pop culture, the Korean Wave has also been influential in Vietnam, spurring numerous joint efforts between the two countries. “V-Pop” and “Viet Wave,” or Vietnamese pop music and film, has created an explosion of pop stars and media products in Vietnam and overseas. These popular representations of the negotiations between modernity and tradition, in addition to burgeoning consumer culture, suggest new subjectivities. The triangulated relationship between Korea, Vietnam and the U.S. forged through war in Vietnam is also manifest in the increased cross-pollination of cultural influence and exchange.

Kyung Hyun KIM is the author of The Remasculinization of Korean Cinema (2004, Duke University Press), Co-editor (with Esther Yau), positions: east asia cultures critique special volume on Asia/Pacific Cinemas vol. 9 no. 2 (fall 2001) and Co-editor (with David E. James), Im Kwon-Taek: The Making of a Korean National Cinema (Wayne State University Press: 2001) (also translated into Korean by Hanul in 2005). He is also active as a film producer, critic and curator, serving as a consultant on a Korean film retrospective held at the Harvard Film Archive in Spring 2005, a major Korean film retrospective held at the Smithsonian Institute Freer Gallery in Washington DC in October 2004, a graduate student conference on Korean cinema held at UC Irvine in March 2005, and a film series of Lee Chang-dong's work held at the Korean Cultural Center in Los Angeles in January 2003. He is Associate Professor in East Asian Languages and Literature department at UC Irvine.

Mariam Beevi LÂM is a professor of literature, media & cultural studies, and Southeast Asian studies at the University of California at Riverside. She specializes in Vietnamese and Southeast Asian American literature, film, popular culture, gender and sexuality, translation, tourism and community politics. She is currently finishing her book project, Surfin' Vietnam: Trauma, Memory, and Cultural Politics, which analyzes cultural production and community politics within and across Vietnam, France, and the United States. Lâm is also co-editor of the Journal of Vietnamese Studies (U Cal Press).

Viet LÊ is an artist, creative writer, and curator. His artwork has been exhibited internationally at The Banff Centre, Canada, and in the US at Laguna Art Museum, CA; Cape Museum of Art, MA; Ethan Cohen Fine Arts Gallery, NY; Hudson D. Walker Gallery, MA; Shoshin Performance Space, NYU, NY; Korean Cultural Center, CA, among other venues. He has received fellowships from the Civitella Ranieri Foundation, Italy; Fulbright Foundation, US-Vietnam; William Joiner Center, US; Banff Centre, Canada; the Fine Arts Work Center, US; and PEN Center USA, US. Shows he has recently curated include the performance event "Miss Saigon with the Wind" at Highways Performance Space, Santa Monica, and the visual art show Charlie Don't Surf! at Centre A in Vancouver, Canada. Le co-curated humor us at Los Angeles Municipal Art Gallery, Los Angeles CA. Le obtained his MFA from the University of California, Irvine, and is currently writing his doctoral dissertation at the University of Southern California.

Yong Soon MIN is an artist and independent curator. Her artistic practice, inclusive of curatorial projects, incorporates diverse media and processes that engage issues of representation and cultural identity, the intersection of history and memory, and the role of the artist and the arts as agents of social change. Her artwork has been exhibited and reviewed widely since the early 1980s. Recent curatorial projects include transPOP: Korea Vietnam Remix, at ARKO Art Center/Seoul and Yerba Buena Center for the Arts/San Francisco; humor us at the Los Angeles Municipal Art Gallery, Exquisite Crisis and Encounters at the Asian/Pacific/American Studies Institute of New York University; Fallayavada: Bahc Yiso Project and Tribute at UC Irvine's University Art Gallery; and THERE: Sites of Korean Diaspora, an international exhibition at the Fourth Gwangju Biennial in Korea. She is Professor in the Department of Studio Art and affiliate faculty in the Culture and Theory PhD program at University of California, Irvine.

"Charlie" NGUYEN is a Vietnamese American film producer, director, screenwriter and martial arts action director. Born in Saigon, Charlie Nguyen immigrated to Orange County, California in 1982 with his family. Charlie fell in love with martial arts movies and began his career by making action short films. In 1992, Charlie Nguyen started his own production company, Cinema Pictures. His first feature, 18th King Hung Vuong, was independently funded and set the tone for the kind of films he would continue to make, infused with Vietnamese history, martial arts and drama. A former student from the University of California Los Angeles film program, Nguyen has produced and directed many music videos, live concerts and documentaries. His other film credits include the romantic comedy Chances Are, the drama Finding Madison and his most ambitious project, The Rebel, which was picked up for distribution by The Weinstein Company, won audiences and grand jury awards at film festivals and broke box office records in Vietnam.

Jung Sun PARK is Associate Professor and Coordinator of the Asian Pacific Studies Program at California State University at Dominguez Hills. She is the author of Chicago Korean Americans: Identity and Politics in a Transnational Community (Routledge, forthcoming) and co-editor of The Borders in All of Us: New Approaches to Three Global Diasporic Communities (New World African Press, 2006). She has also published journal articles and book chapters in the U.S., Korea and Japan on topics such as transnationalism, (im)migration, race/ethnicity, identity, citizenship, and Korean/East Asian popular culture (including Hallyu and Japanese animation). Her current research focuses on two themes: transnational flows of South Korean/East Asian popular culture and the changes in South Korean citizenship in the global era.