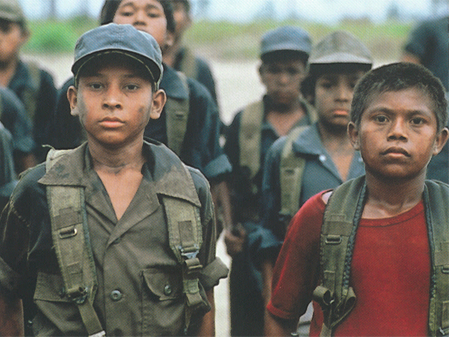 Film still from Ballad of the Little Soldier 1984

As part of the UAG's continuing programming for the fall, the gallery is pleased to announce five screenings of the work of German director Werner Herzog. Among the many filmmakers to emerge out of the 1970's New German Cinema Movement--Margarethe von Trotta, Rainer Werner Fassbinder or Wim Wenders--Herzog arguably has enjoyed the most broad acclaim for his films. This is in spite of the fact that Herzog's work routinely came under attack by both the Left and the Right for his often heavily aestheticized sensibility that equivocated between documentary and fiction. This series shall present a non-chronological overview of some his lesser known "documentary" works to frame two films which are widely considered his masterpieces--Herz Aus Glas (1976) and Fitzcarraldo (1982).

Where the Green Ants Dream (Wo die grünen Ameisen träumen) 1984