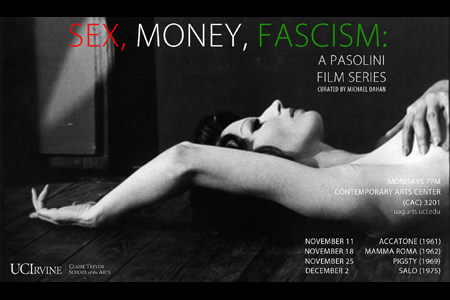 In anticipation of artist Yoshua Okón's new commissioned work for the CAC Gallery in January of 2014, the University Art Gallery and the Department of Art present SEX, MONEY, FASCISM: A PASOLINI FILM SERIES.   Yoshua Okón will produce a film installation on the murder of Pier Paolo Pasolini, the controversial Italian filmmaker, poet, writer and intellectual. Giuseppe Pelosi, a seventeen-year-old hustler, was arrested and confessed to murdering Pasolini. However, in 2005 Pelosi retracted his confession, bringing renewed attention to both Pasolini’s homicide and artwork, the latter of which was regularly the subject of censorship.

Pasolini's first novel Ragazzi di Vita (1955), which dealt with the Roman lumpenproletariat, resulted in obscenity charges. His final work, Salò, or the 120 Days of Sodom (1975), was a scathing critique of fascism that allegorically employed explicit scenes of sadistic violence. Based on the novel 120 Days of Sodom, by Marquis de Sade, Salò is considered his most controversial film. Time Out’s Film Guide named it the Most Controversial Film of all time.

Okón’s film installation returns to this scene of the crime, both literally (Pasolini’s death) and figuratively (the controversy surrounding his final film), to consider the interstice between aesthetics and obscenity as a space in which artists “speak truth to power.” OC Weekly Review

The series will be held Monday evenings at 7pm in the Contemporary Arts Center (CAC) 3201 and will begin on November 11 with Pasolini's first film Accatone (1961), a story of pimps, prostitutes and thieves.