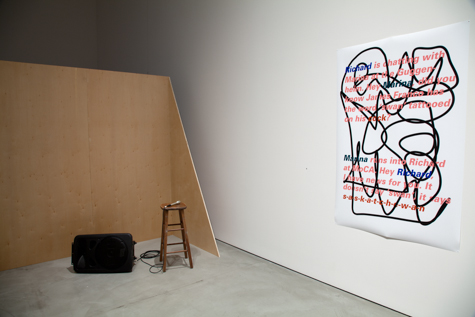 Names are inextricably linked to one's identity, functioning as "symbolic forms."  A proper name is a "designator of reality," as Jean-Francois Lyotard has put it, which grounds a subject within the Cartesian laws of the world.  What if this referent is altered, changed or twisted?  Will it leave a particular subject uprooted, its identity deconstructed?

There have been various reasons for artists to create alter-egos, personae, doppelgangers and to adopt pseudonyms.  These strategies are used to blur the boundaries of fact and fiction - of reality and imagination - and to (re)insert themselves into historic canons.  Previous attempts to undermine and question subjectivity and modern authorship became virulent with the major paradigm-shifts of the 1960s and 70s.  Supported by the critical discourses around subject-construction and authorship initiated by Roland Barthes and Michel Foucault, artists started to challenge the traditional idea of the authorial, creative subject and the institutional framework surrounding artistic production.

With a Name Like Yours... presents artworks and writings by international artists who use contemporary versions of these strategies as mode of interrogating the principals of the art market as well as the post-Fordist pressures of individualization.  These tactics of disguise evolve around an almost schizophrenic split between the absence and the presence of the artist-subject that characterizes our capitalist society, a condition more relevant than ever in articulating socio-political critique.

This exhibition is made possible by generous support from the Austrian Federal Ministry for Education, the Arts and Culture.