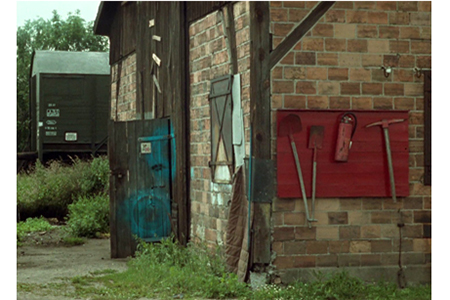 The spatial dimensions of rehearsal become clearer with cinema. Filmic exercisings or alternations of action are closely related to the positioning in a concrete space or even to a shifting of location. This kind of dynamic placing brings into play the perspective-related meaning of action. Different from dealing with „the empty space“ of theatre (Peter Brook) or with the „any-space-whatever“ of a studio close-up (Gilles Deleuze) the specific filming spot is configured by pre-cinematic significances especially if the spot is an authentic location. Those films that combine an improvised, varied or verifiable action with the perception of cinematic translocation open the chance to gain social and aesthetic experience for every participant (author, protagonist, beholder …). To clarify this thesis, I will raise different cinematic practices as to be observed in: A and  B in  Ontario (Hollis Frampton / Joyce Wieland, 1984), Idiots (Lars von Trier,1998), Pedro Costas „Fontainhas“-Trilogy (1998-2014), realized with immigrants from Cape Verde living in Portugal … The second part of the lecture will be a presentation of my film (with Bärbel Freund) Färblein (Colorette) (16mm Film, digital transfer, 1992, 21 min), an experimental documentary on sites of specific urban colors in former East Berlin and GDR.

Rainer Bellenbaum, born in 1957, is a writer, film-maker and media theorist; he lives and works in Vienna and Berlin.

This lecture is part of the MFA graduate Visiting Artist Lectures Series.