Lacan in the Americas 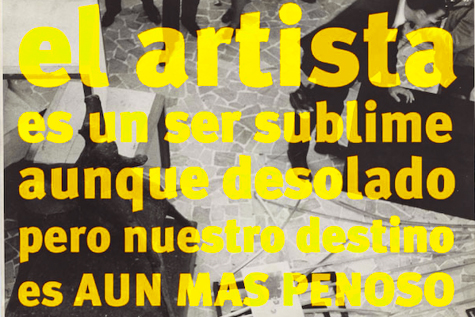 Roberto Jacoby is an Argentine artist whose artwork in the 1960s defined a branch of “new media” conceptual art, one informed by the writings of French psychoanalyst Jacques Lacan, a full decade before such aesthetic experiments were made in the Northern Hemisphere.  During Jacoby’s hiatus from the art world in the 1980s, he was the lyricist for the Argentine new wave band “Virus.”  In 1968: el culo te abrocho Jacoby superimposes those lyrics upon digital reprints of archival documents related to his activities at the Instituto Di Tella in Buenos Aries In the year 1968.  Taken together, the political posters and lyrical texts provoke us to reflect upon the utopian, poetic hopes that characterized the global cultural revolution of the 1960s and to ask what that legacy might mean to us now. Please Join us for a roundtable discussion on Roberto Jacoby’s 1968: el culo te abrocho.