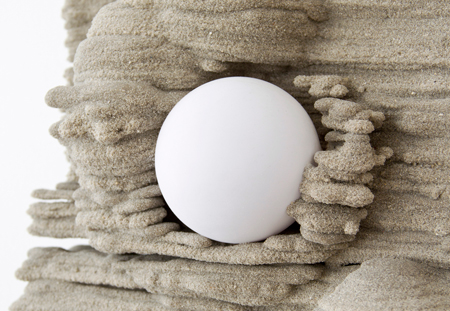 Dilated Proximity features work by Los Angeles-based artist Dwyer Kilcollin, whose practice is concerned with present-day technologies that transform the digital image. Kilcollin combines technology-assisted, handmade, and manual procedures in novel ways to facilitate the working process. We have characterized this manner of working as dilated proximity because Kilcollin fundamentally reinterprets space in ways that confront the viewer, a fundamental facet of Kilcollin’s practice. For instance, her use of sand and resin is central to each work in this exhibition. Kilcollin's subjects are initially digitally rendered as fluid, organic three-dimensional models on the computer screen. The image is then projected, layer-by-layer, onto a flat surface. Finally the object, via the hand-built tool and chosen materials, slowly builds up a multifaceted form. Because Kilcollin's process merges notions of modeling and craft along with digital and physical elements, ultimately technology and apparatus are prostheses for the artist.

The exhibition is accompanied by a publication featuring essays written by co-curators Brianna Bakke, Erin Gordon, and Joshua Ross. Dilated Proximity is presented in conjunction with a two-part film series curated by Erin Gordon titled New Flesh/Old Flesh through February 6, 2016, as well as an artist talk presented by UC Irvine's Visiting Artist Lecture Series on January 25, 2016.

Kilcollin's work has exhibited since 2011. The artist earned a BFA from Washington University in St. Louis (2006) and an MFA from the Roski School of Art and Design, University of Southern California (2013). Recent solo exhibitions include "Banquet Conference," 2015, American Contemporary, New York and "THE VIEW," 2014, M+B Gallery Los Angeles and LA>< ART, Los Angeles. Group exhibitions include "Cool - As a State of Mind," curated by Charlotte Cosson and Emmanuelle Luciani, MAMO, Marseille, France; "Pummus," a two-person show with India Lawrence, Secret Recipe, Los Angeles, CA; and "Me and Benjamin," Xippas Galerie, Paris.

New Flesh/Old Flesh is a two-part film series curated by Erin Gordon in conjunction with the exhibition Dilated Proximity: Dwyer Kilcollin. The series features Videodrome (1983) dir. by David Cronenberg and RoboCop (1987) dir. by Paul Verhoeven. These films explore the ways in which we choose to navigate our digital lives; the characters are exploited by technology as a communicative form and find redemption or tragedy in the process. By criticizing modern forms of technology, both films, as products of the 1980s, explore issues that are still relevant today.