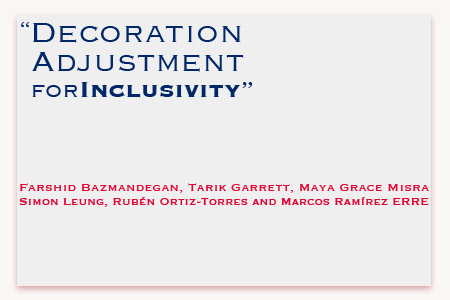 "Decoration Adjustment For Inclusivity” is an exploration into the image of the American flag. As an emblem of the United States, the American flag is a strong symbol of wide ranging cultural significance. Its image acts as a signalling device, whether it is a symbol of nationalist pride, of government, or liberty and democracy. For some, the flag is used to project these values. For others, the opposite rings true. “Decoration Adjustment For Inclusivity” features interpretations and responses to the flag from a dynamic group of artists living and working in Southern California. Sculpture, community practice, and performative gestures made within the last four years explore the loaded symbolism of the flag, and reflect complex narratives of identity, multinationalism, and political expression. Collectively, these works articulate the American flag as a contemporaneous cultural artifact, appropriating its image and utility to deconstruct its meaning and relationship to power.

Farshid Bazmandegan is an Iranian American interdisciplinary artist and curator working between experimental media, installation and socially-engaged art. His practice constructs philosophical metaphors to raise awareness of socio-political relations between people, their environment and the institutions that govern their everyday life, while also speaking to social and cultural issues he sees in his daily life now. He has exhibited his work at the Museum of Contemporary Art San Diego, UC San Diego University Art Gallery, Adam D. Kamil Gallery, San Diego Mesa College, A Ship in the Woods and The Front Art Gallery. He is an alumnus from the visual arts department at UC San Diego where he founded Triton Arts organization and the Arts and Community Engagement Initiative in which he has organized many exhibitions and socially-engaged public programs in the past five years with UC San Diego’s art community, under the employment of UC San Diego Dean's office of Arts & Humanities.

Tarik Garrett was born in 1990 in Los Angeles, California where he lives and works. He received a BFA from the Cooper Union, New York in 2013. Working across different mediums and primarily using objects found across the harsh landscape of industrial and social decay, he seeks to connect threads of research, self-reflection, and movement to create a sort of circuitry. His work addresses formal concerns of the phenomenological traces and emotional presence that builds up around material objects, like residue, as they are affected by traumatic events and the passage of time. Tarik is currently an MFA candidate at UC Irvine.

Maya Grace Misra is an artist and researcher working in vexillology, the study of iconography and artifacts such as flags through which national history, identity, and belonging are conveyed. She investigates these forms through a variety of media including photography, sculpture, and miniature painting. Referencing both national symbols and institutional critique, Misra’s work untangles the images that are presented to us alongside socially accepted historical narratives. Misra draws on her own experience as a white-passing South Asian- American woman to situate these images and artifacts within larger frameworks of culture and history. Formerly based in New York City, Misra currently lives and works in San Diego, CA as she pursues an MFA degree in visual arts at the University of California- San Diego.

Simon Leung was born in Hong Kong, educated at UCLA, Columbia University, and the Whitney Museum Independent Study Program. Leung's projects in various media include an on-going opera project set in Los Angeles’ Griffith Park; a live/video work addressing the philosophical and political dimensions of the glory hole in the time of AIDS; a trilogy on the residual space of the Vietnam-American War; an extended proposal of Duchamp’s oeuvre as a discourse in ethics; a video essay on war, real-estate, and the site/non-site dialectic instigated by Smithson’s reception of Poe; a twenty-year plus collaboration with the writer and art world figure Warren Niesłuchowski; “art workers’ theater” addressing the intersection of art, labor, education, institutions, and exploitation; and context-specific works centering on the squatting body as a heuristic cipher. Leung has participated in the Guangzhou Triennial (2008), the Luleå Summer Biennial (2005), the Venice Biennale (2003), the Whitney Biennial (1993), and has also exhibited at Pat Hearn Gallery, the Museum of Modern Art, the Museum of Contemporary Art, the Art Institute of Chicago, the Generali Foundation (Vienna), 1a Space (Hong Kong), NGBK (Berlin), and Sala Mendoza (Caracas). In 2008, he received a Guggenheim fellowship and the Art Journal Award for his essay The Look of Law. He has taught in the Studio Art Department at the University of California, Irvine since 2001.

Rubén Ortiz-Torres was born in Mexico City in 1964. Educated within the utopian models of republican Spanish anarchism soon confronted the tragedies and cultural clashes of post colonial third world. After giving up the dream of playing baseball in the major leagues, and some architecture training (Harvard Graduate School of Design) he decided to study art. He first attended the Academy of San Carlos in Mexico City, and later was a student at Calarts, one of the newer and more experimental schools. He is part of the permanent Faculty of the University of California in San Diego. His work is in the collections of The Museum of Modern Art in New York, The Metropolitan Museum of Art in New York, The Museum of Contemporary Art in Los Angeles, the Los Angeles County Museum of Art, Artpace in San Antonio, the California Museum of Photography in Riverside CA, the Centro Cultural de Arte Contemporaneo in Mexico City and the Museo Nacional Centro de Arte Reina Sofía in Madrid Spain among others.

The exhibition has been made possible with the support of UC Irvine University Art Galleries, UCI Associated Graduate Students (AGS), the Elias + Fontes Collection, and the artists for their participation.

Negotiating a National Identity: Flag Use in the United States